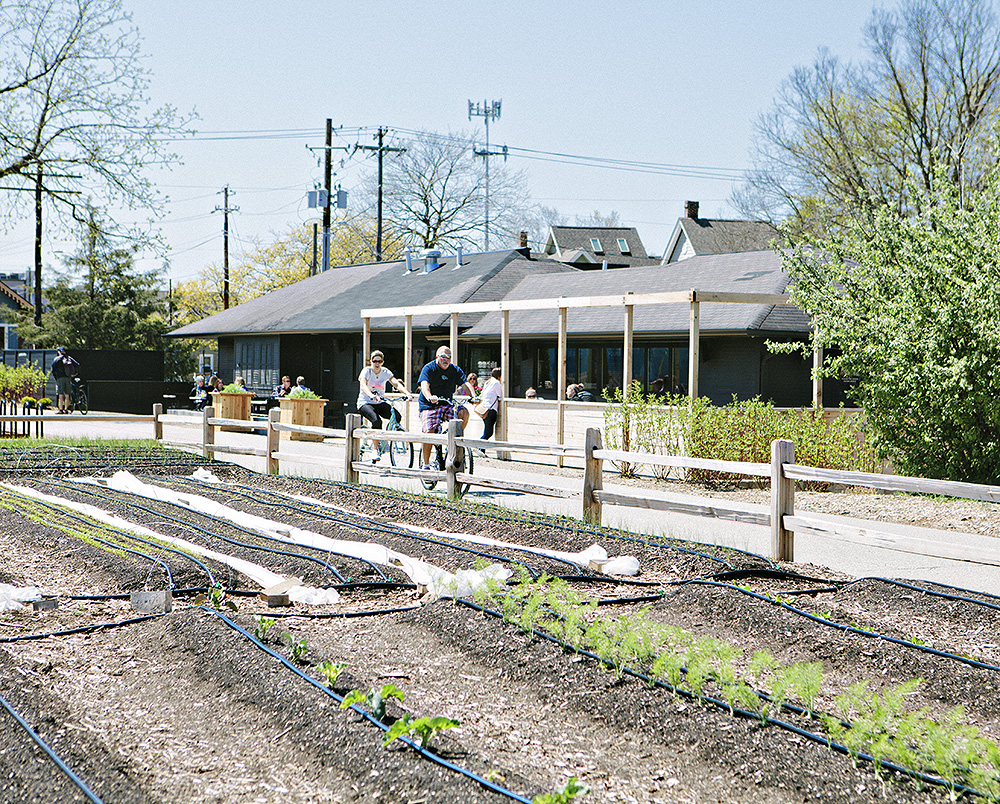 We talk a lot about vision at Patachou. Everyone – whether an individual, family or a business – should have a guiding vision, a true north made up of guiding principles that set expectations for all. A definition of the what and why. What if neighborhoods were forced to recognize that the lack of having a clearly defined, clearly communicated vision was the real reason for instability and a lack of long term success? Preparation for a deep-picture conversation about Broad Ripple with some key city and neighborhood officials, has led me to some critical thinking: What, if any, is Broad Ripple’s vision of and for itself? If there is a vision, how is that vision being communicated? Is the vision obtainable? And, perhaps, most importantly, is there a gap between the vision and reality?

Broad Ripple is being forced to recognize what it has allowed itself to become: a bi-polar neighborhood whose good parts have been easy to duplicate (see Mass Ave and Carmel Arts District) and whose bad parts (out of control late night cheap drinking scene) are hard to shed. What happened to this historically vibrant art colony-esque community once known for being home to original and innovative restaurants, retail shops and art galleries? Is that Broad Ripple really a thing of the past as our media outlets and civic leaders would lead us to believe?
John and I lived in Broad Ripple for many years until very recently. We are Broad Ripple business owners and long-time supporters of the entire neighborhood. We bank, we shop, we use the recreational trail there almost daily. We support The Indianapolis Art Center, one of the largest and most highly recognized community art education centers in the Untied States. And, when we are banking, shopping, using the trail etc…we are surrounded by people. lots of people, doing the same things.

Broad Ripple cannot be defined by the recent violent gun-related crimes committed by neighborhood interlopers against late-night revelers. Broad Ripple is so much more than Broad Ripple Avenue-an avenue awash with businesses that exploit the party patterns of young crowds (most of which do not live or work in Broad Ripple) without offering them protection from the riff raff (most of which do not live or work in Broad Ripple) that see an opportunity to exploit these crowds. The city thinks that closing Broad Ripple Avenue to car traffic and having greater police presence during certain hours will cure the neighborhood of all of its ills and, maybe, they are right. I think, however, that focusing on the “other” Broad Ripple- the one where Petite Chou and Public Greens and its model micro farm exist- is the better way to go. Patachou has invested close to 2 million dollars in this area since opening Petite Chou nearly seven years ago. I remain positive, even bullish, that Broad Ripple will continue to grow and prosper as a lively and important part of the city-but not without an effort to create its own 2020 Vision of greatness. As a company, we are still excited and committed to being a part of this community.

Broad Ripple is the original cultural district in Indianapolis, full of vital, original, innovative and independent restaurants, galleries, small shops, salons and other mostly locally owned businesses. These businesses are supported by Broad Ripple neighbors for sure but its the visitors to the area that carry the bulk of support. The Monon Trail’s started in Broad Ripple and Broad Ripple still attracts the greatest amount of visitors to the trail. The Indianapolis Art Center, the river that sets its boundaries, Broad Ripple Park and the Broad Ripple Farmer’s Market, the cottage style homes and places like Just Pop In, Rusted Moon Outfitters, Ossip Optometry, Hardwick’s, Petite Chou, Broad Ripple Brewpub, Girly Chic Boutique, Bazbeaux’s Pizza and newcomers like Nicey Treat and Public Greens are the true face of Broad Ripple. Broad Ripple is still a destination-but one with an identify that shifts drastically at 11 pm on Friday and Saturday nights.

This original cultural center has been robbed of its identity. Robbed by local governments too eager to re-produce new, clean and investment-friendly copies of Broad Ripple without considering the long-term consequence of such development. Robbed by our media, eager to paint with one stroke a picture that is too narrowly defined and fails to tell the entire story. And, worse of all, Broad Ripple has been robbed intellectually: it has been robbed because it lacks a clearly defined and clearly communicated vision of and for itself. If it had a strong vision, would chains be sitting on the corners of every intersection of its main street? Would bars be the only businesses allowed to identify the area? Would there be such resistance to upgrading and improving the neighborhood infra-structure (EX: Whole Foods)? Broad Ripple is a vibrant community full of texture, diversity and life. Perhaps its time to re-visit and re-create a vision that Broad Ripple has for itself with big-picture conversations and real ideas? Let’s begin to do our part in honoring the true nature of Broad Ripple by reminding ourselves, and our customers, the city, the media and especially the Broad Ripple Village Association, that culture and cultural districts need a history of texture and diversity to be authentic. Visions must change as time moves forward; that without a clearly defined, communicated and obtainable vision that sets the tone of growth as well as the expectations of and for the neighborhood, there can be no sustainable enduring success. And, let’s thank our staff and regular customers who support us for understanding the “real” Broad Ripple. – Martha Hoover