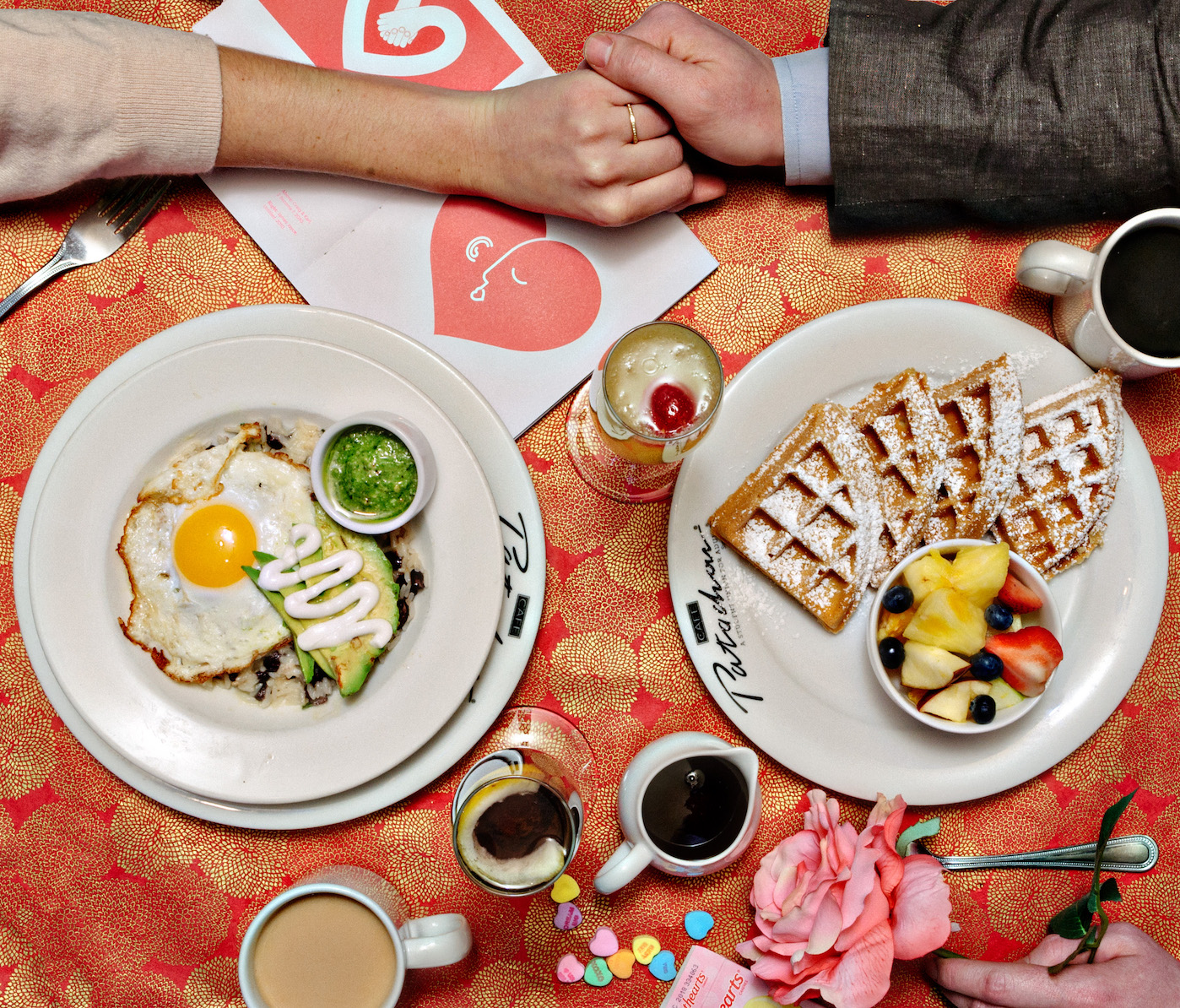 We asked our followers to submit stories about how they fell in love, met someone at Cafe Patachou or made a special connection at one of the restaurants. Thank you to all who sent in their stories and made our hearts burst on this Valentine’s Day!

Early on in the summer of 2011, one of my university classmates asked me out for coffee and breakfast at Cafe Patachou, one of his favorite Indy joints being the Indianapolis native that he was. I had just graduated with a BFA in Photography and was set to leave the US in a couple of weeks to prep for grad school in England come September. However even with this knowledge in hand, he grabbed the chance to ask me out because, as he says, he had nothing to lose! We tucked in and swiftly got to know each other having never really talked throughout the semester. This first date over brunch and coffee at Cafe Patachou was the first of many unexpected moments – I ended up spending my summer gaining a best friend and a few months later was in an overseas long distance relationship… which extended itself to several years spent apart in different countries. But this month we’ll celebrate 4 years of marriage (1.5 of those years also spent apart, because who cares for formalities!)

My husband and I were married at the Indianapolis airport at 5am on 6/6/2013 and all 17 of us went to Cafe Patachou for breakfast just before my husband and I got on a plane for our honeymoon!

One of the first dates my now husband and I went on was to Patachou! We fell for the cinnamon toast at first bite. After our tiny wedding this September we had a honeymoon day that started with a long brunch at Cafe Patachou and we still talk about our server, Pascal. Here’s to hoping my husband will look at me the same way he looks when his croissant and waffle get delivered to the table.

I get brunch with my friends here every weekend at Patachou. These brunches got me through some of the hardest times of my life this past year. I went through a divorce over the summer and then lost my mom to a long battle with cancer in the fall. She passed on November 4th, the day before my birthday. On November 5th, my best friends joined me for brunch. Weekend brunch at Patachou became my new normal. We’ve laughed and cried over our fair share of Cubans and egg salad sandwiches and mimosas. Patachou will always hold a special place in my heart.

We had Patachou the morning we were engaged (49th and Penn) walked to Holcomb Gardens and he asked. My walk was fueled by the hippie with a Benz — also amazing!

So Sam and I had our first date at Cafe Patachou in Washington street on New Year’s Eve 2016, what started as a brunch turned into an entire day date ending with a kiss at midnight and now we’re in the process of getting engaged. It must have been that Cuban breakfast.

My now husband met my parents for the first time at 49th/Penn for brunch!  Meet the parents cinnamon toast edition!

My now husband and I had breakfast at the downtown location on our first full day date. We had only met a couple of times before this. He lived in Noblesville and i lived downtown and I wanted to plan the perfect downtown date. Did I mention it was Valentine’s Day?! As a first date, this made things a little awkward but sweet. We still talk about that date and Patachou (the omelette and cinnamon toast) are the first thing my husband mentions!

He lived in Plainfield, and I Lawrence (a 40 min drive). He only came over about once every two weeks. At some point I suggested we go to Patachou instead of the greasy diners he usually likes. Well, he fell in love with Patachou, moved in with me, and now we go every week.

My husband and I chose our “last meal” as a family of two to be Patachou! We went to breakfast and had bacon and avocado broken yolk sandwiches and had too many cups of coffee while we talked about what we thought out daughter would be like. We left patachou and then went straight to the hospital for our induction and met baby girl the next day!

While I’m no longer in a relationship with the guy, the Clay Terrace location was definitely where we “fell in love” and got to know each other over many breakfast dates. Through the many visits to Patachou I’ve gotten to know the staff and they’ve become like family. So much so, on my most recent visit I brought my mom, who was in town from out of state, for breakfast and to meet all my favorite people on staff. Mike and Pascal graciously spent time talking with her and we had a wonderful time. At the end of our meal, my mom shared with them that she doesn’t get to visit as much as she would like since it is such a long trip (she lives in California) so when I meet a guy in the future she won’t get to meet him immediately. So she made a pact with them that whoever it is I date, they will have to give a seal of approval and make sure he is worth my while. I may not have met my future mate yet, but when I do, Cafe Patachou will play an integral role in making sure he is up to par!

I owned a Saharan expedition company with a dear friend of mine named Nimit, he was a Tuareg from Mali. I loved what we did, we loved the desert, the camels, the Tuareg. In a tragic accident, Nimit was killed near Timbuktu. Everything I had ever planned for my life changed overnight. 2 months later, Nik and his parents came in for breakfast to the place I was waiting tables called Cafe Patachou in Indianapolis. Nik had scraggly blond haired, CA board shorts and Ugg boots. He was sailing a 22 foot sailboat from Coronado, CA through the Panama Canal to FL and decided half way through his trip to come see his parents in Indianapolis. He was 23, and I was 35. He was leaving to fly back to his boat the next day. We stayed in contact via email. We talked about books and adventures we did and had planned. 6 months later, after his trip, he showed back up in Indianapolis at my doorstep. I was on my way to go visit an explorer for the Royal Geographic Society in Surrey, England named Wilfred Thesiger, and Nik said he would come along.