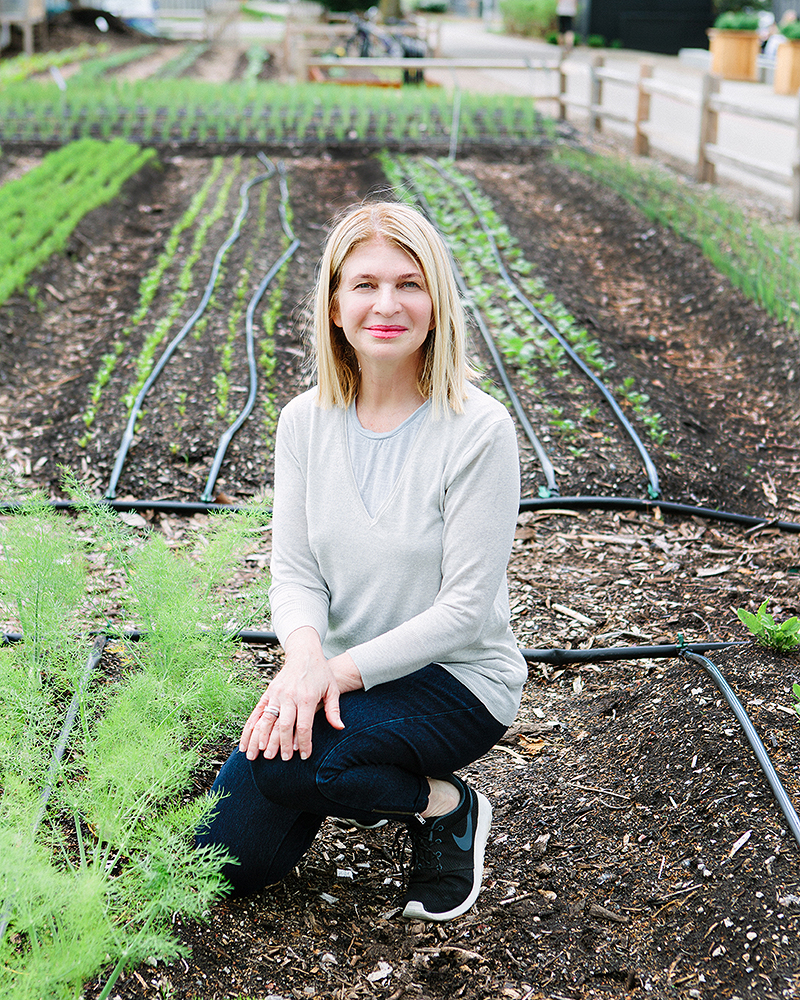 It was 1989 in Indianapolis’s picturesque Meridian-Kessler neighborhood when Martha Hoover was preparing to open her first restaurant. Café Patachou was almost ready to go, housed in a small 1940s-era strip mall. It was the “unpolished gem” she’d been searching for, perfect to house the cozy neighborhood café she had always dreamed of. But the 34-year-old had a big problem ahead of the opening: Her contractor hadn’t installed a dishwasher. Why? Because he was certain that in a matter of days, Café Patachou would be closed for good.

Today, as head of Patachou Inc., Hoover independently owns and operates 14 restaurants across Indianapolis. She is a James Beard Award semifinalist. Her latest venture, a fried chicken place called Crispy Bird, just opened last month. Earlier in 2017, she unveiled a new micro-craft cocktail bar with 16 seats and a long waiting list. 2018 will see another location of her fast-casual salad spot Public Greens.

Now in her 60s, Hoover can pinpoint a teenage trip to Paris as a turning point. She frequented markets, cafés, and restaurants, instead of museums and guidebook attractions in the City of Light. “I knew my life would be forever different because of what I had witnessed in food,” she says.

Hoover returned to her home in Indiana and told her parents she intended to go abroad to be a chef. Usually supportive, they shocked her. “[My father] said . . . I couldn’t go to France and be a chef because, ‘The French don’t accept women in the kitchen,’ ” she tells Vogue. “[In the States] we have chefs that learn by standing at their mother and grandmother’s side in the kitchen. It was a crazy paradox and I didn’t get it.”

Hoover pushed against similar forces when she finally did open Patachou, though it took her time to get there. She became a prosecuting attorney in Indianapolis’s newly established sex crimes division in the 1980s, got married, had children, and eventually realized that nagging desire to open a restaurant wasn’t going away. Enter the unpolished gem at the corner of 49th Street and Pennsylvania Avenue, where her “student union for adults” eventually introduced Hoosiers to lattes, seasonal salads, and omelets with local eggs.

“Martha is a pioneer in Indianapolis. To me, her greatest impact has been shepherding people to eat fresh food that isn’t served in a fine-dining environment,” says Neal Brown, a fellow Indianapolis restaurateur (Stella, Pizzologoy, The Libertine, Ukiyo) and James Beard semifinalist. “It’s true that chefs have been doing these things for a very long time, but in Indy, no one was serving direct-from-the-farm goods outside of a few fine-dining places. By focusing her attention on casual dining, she was able to influence more diners.”

The lack of quality restaurants serving super-fresh foods was one of Hoover’s motivations for opening the original Patachou. After all, Indiana is a state where the best corn is from roadside stands, where farmers run out to pick the ears fresh from the field—it was surprising how few restaurants were ahead of the curve. To Hoover, it was only natural. “It seems so dumb to talk about eating seasonally because that’s the way you are supposed to eat,” she explains. “And not just because of convenience, but that’s when ingredients are at their peak and prime taste.”

Prioritizing local and seasonal menus—and being transparent about it—shaped the mission of Patachou Inc., from its philanthropic endeavors to the “urban cafeteria” Public Greens, which sources most of its produce from an adjacent garden. Even at her latest restaurant, Crispy Bird, Hoover thought about flavor first. Instead of using breading and brining to enhance commodity chicken, she turned to a heritage breed that provides a more flavorful meat.

Hoover admits it can still be a challenge to convince value-seeking diners the extra cost for seasonal and local food is worth it, but she seeks to uphold the highest standard in farm-to-table. “Farm-to-table is bit of a meaningless phrase now,” she admits. “I think that the next thing we really need to do is talk about the lack of transparency in the industry. I don’t think it is good enough to say you source locally because you buy microgreens from a greenhouse. That’s not what sourcing locally means. It means you are working with farmers hand in hand and planning your menu and figuring out what you’re serving [with them].”

Besides relying on local farmers first, Hoover has also set an example with sustainable business practices. Rachael Lekic, Patachou’s director of sustainability (and Hoover’s daughter), leads the environmental initiatives for the company, which range from composting to installing LED light bulbs and choosing quality water filtration systems that have saved the company thousands on bottled water in the long run.

All in all, Hoover says the restaurant business is overdue for an overhaul. She points not just to the current revelations about sexual harassment in the workplace (some of the industry’s biggest names, like Mario Batali, Ken Friedman, and John Besh, are facing allegations), but the overall responsibility of owners to make smarter choices about their business, from transparency of food sourcing to pricing and employee benefits.

“People who are proud of where they work and the product they produce create energy and excitement for a workplace. It is a win-win,” she explains. “What I don’t understand in this industry, [is that] there are so many men who think of themselves as innovators with the kind of food they’re serving, and they thought that was enough. They weren’t innovators in how they treated their staff and community. To me, that is not compelling enough for me to call them innovators.”

Hoover jokes that she probably benefited from having never worked in a restaurant before, because she made it a commitment of the company to foster employee growth and community development—something that certainly isn’t standard across dining establishments. Besides offering her more than 400 employees health care and retirement savings plans, Hoover also established financial literacy courses and created a Patachou Emergency Relief Fund. The employee-managed fund is paid into by the company and serves as a safety net that Hoover says isn’t just good for her staff, but adds up to a sound business decision. Employees who aren’t distracted by monetary emergencies remain focused at work, her thinking goes. In 2013, she also established the Patachou Foundation, which directly feeds and educates 1,000 food-insecure children in Indianapolis.

For Hoover, it all stems from something fairly personal.“When you run a business, you are advertising to the world who you are and what your values are,” she explains. Insisting on sustainable practices across her Indy restaurants has made Hoover’s values clear, and simultaneously established her as a powerful entrepreneur at the helm of a growing, egalitarian empire.