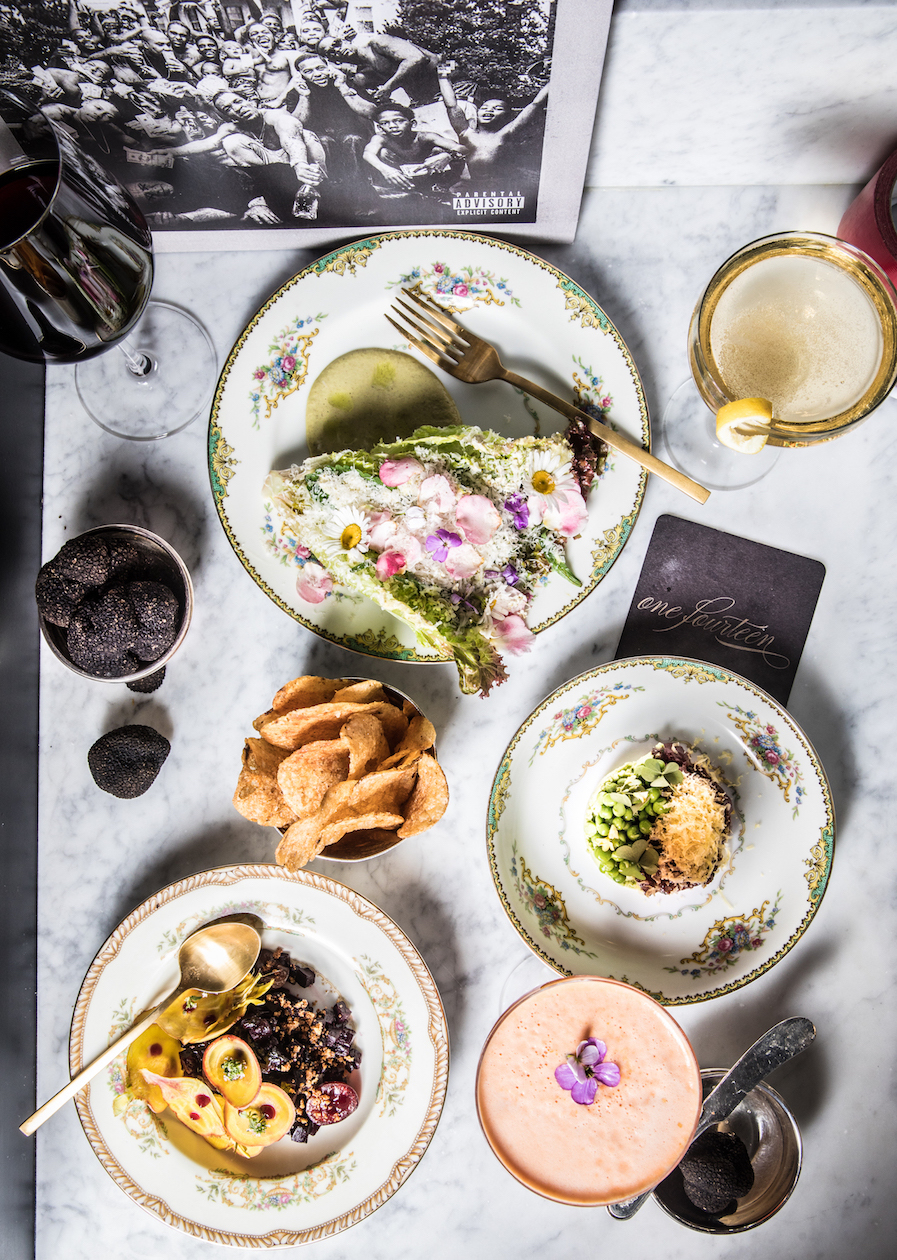 A woman walks into a bar. It’s dark. Very dark. David Lynch dark. She needs a minute to adjust to the opaque air of this snug, 16-seat room with black walls and dense velvet curtains, for her pupils to expand enough that she can finally make out the votive-lit faces of diners sipping from brass pineapples and Moroccan tea glasses while a soul-funk soundtrack plays softly—and all of this makes her wonder, in a spasm of insecurity, if she is in the right place and not accidentally crashing the party of someone much cooler than her.

The noir tone is appropriately disorienting at Bar One Fourteen, Patachou Inc.’s “luxe microbar, dining, and listening room” that opened in Meridian-Kessler over the summer. You go in blind (night blind, at least), which renders you a little more vulnerable and less sure of what to expect. This is the perfect setup for what executive chef David Hoover delivers in tiny, poetic courses—like a stack of sliced in-season tomatoes and peaches doused with walnut milk, and a single fluffed egg placed back in its shell, topped with inky sturgeon caviar, and suspended in dill foam—building up to a truffle-topped cheeseburger worthy of the silver platter on which it is served.

Hoover’s menu is brief and precise, a smartly cropped snapshot of his Paris cooking-school days and his work at Restaurant Relæ in Copenhagen, among Condé Nast Traveler’s 50 Best Restaurants in the World in 2017. He is also the son of restaurateur Martha Hoover (the force behind not only Bar One Fourteen, but also Cafe Patachou, Petite Chou, Napolese, Public Greens, and the upcoming Crispy Bird). That pedigree didn’t exactly hurt his career when he returned to Indiana after his work visa expired. It was around the same time that his mother was putting the finishing touches on “this super-secret well-designed bar with an amazing sound system,” as the 28-year-old chef describes the luxuriously sleek den with a turntable, Klipsch Forte speakers, and an old-school reel-to-reel tape player stacked along one wall. “That part was 100 percent Martha,” he says. “Once I walked into the room and got to see what she was doing, I was like, ‘I have to be involved with this somehow.’”

In fact, David Hoover’s dandified interpretation of bar food (every morsel prepared behind the actual bar, mind you) wasn’t even part of the plan until a few weeks before opening night. Turns out, it fit perfectly. Warm, earthy chanterelles and royal trumpet mushrooms share a plate with artfully cooked vegetables and an unbroken confit egg yolk for DIY oozing. Wafer-thin potato slices are packed into starchy little bricks of potato pavé. Topped with smoked trout roe and shaved black truffle, they sit in a pool of caramelized cream, like a decadent deconstructed scalloped-potato casserole.

An amuse-bouche will appear out of nowhere, maybe a simple, refreshing plate of slivered carrot drizzled with tomato water, or three symmetrical chunks of cucumber and honeydew made savory with lemon balm. For dessert, chocolate mousse sits on a pouf of marshmallow fluff and fruit preserves with shards of burnt honey scattered over the chocolate. Even bartender James Lantgen’s thoughtful lineup has a culinary soul. Spirits are layered with flavors in stunners like the Blood Orange Paloma, The Salty Martini (garnished with a caper berry and shaken with its brine), and A Proper Mai Tai, enhanced with the sweet almond aromatics of falernum and poured over ice in a brass-pineapple chalice.

About that truffle burger, though. It costs $28 and fits comfortably in the claw of your hand as a foil-wrapped capsule of rare beef and brioche fused with a molten layer of Spanish sheep’s-milk cheese that Hoover renders even gooier by folding in more milk. The bottom bun gets a smear of aioli and slivers of Regalis black truffle, a luxury mushroom with a flavor so rich with umami, it’s practically sensual. Ordering one burger for the table to share is a rookie mistake; everyone will want their own. Even its down-market counterpart, the $16 Fancy AF Burger (served truffle-less but with housemade bread-and-butter pickles that cut through the richness) is equally face-melting. Any kitchen that can execute a burger this lovely deserves high praise. Hoover should get a Nobel Prize for crafting one in such a miniscule workspace, using classic French techniques and clever kitchen hacks in equal measure. He has a one-hour window after the Patachou/Napolese kitchen next door closes for the day and before Bar One Fourteen opens for its Thursday-through-Saturday-evening business. He uses that time to give the night’s burgers a quick sear in a hot pan to form a nice, meaty crust. He seals them in a bag with butter and cooks them sous-vide for 30 minutes, and then blowtorches each burger to order, re-crisping the sear and melting the cheese.

Hoover seems equally inspired by another signature dish at the other end of the food chain: elaborate crudité that might as well be art on a canvas of crushed ice. Each vegetable gets its own treatment. Hearts of romaine are dotted with Thai chili sauce. Radishes wear tomato-water gelée. A piece of celery that looks sad and soggy tastes surprisingly sweet and slightly boozy.

It’s easy to get caught up in the magic of this little place, to feel fancy AF as you nibble gingery peeled tomatoes and cram tavern-style burgers into your mouth to the moody beat of a curated playlist. (The staff picks a stack of vinyl they want to play every night, and the reel-to-reel compilations are created by local musician Vess Ruhtenberg.) Maybe you will order a second (third? who’s counting?) glass of Penner-Ash Rubeo, start to feel like you are part of some cool-people party, and lose track of time. Or maybe a server will not-so-gently let your four-top know, before he’s even brought out your final round of food, that he needs to clear your table for his next reservation at 8. And the spell will be broken.

The daylight will be too much when you leave, as strong a shock to your system as the darkness was when you arrived, especially if you weren’t ready to call it a night. Poor you. But then, what does it say about a place if your biggest complaint is that you couldn’t stay just a little bit longer, and then a little bit longer?