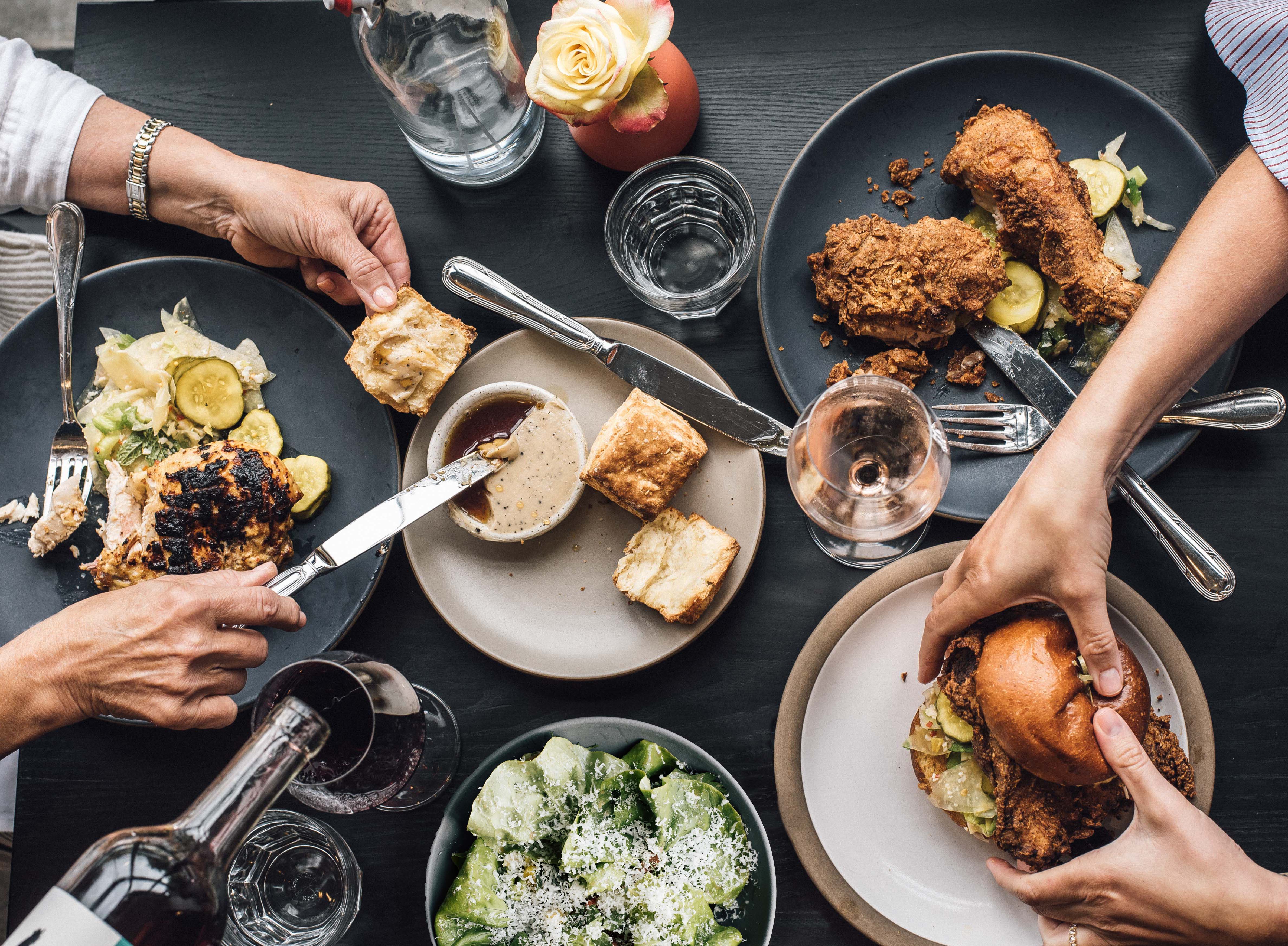 The scene: This month will conclude with the largest single-day spectator sporting event on Earth, the 102nd running of the Indianapolis 500, a Memorial Day weekend institution since 1911. The race puts a spotlight on Indy each spring, and as the city’s fortune has surged and its downtown has experienced several boom years of new hotels, restaurants, attractions and events (the latest was the becoming the first city outside the South or West to host the College Football Playoff National Championship), travelers are increasingly visiting all year round. When they do, Martha Hoover is ready to feed them.

Hoover was a sex crimes prosecutor whose inability to find healthy breakfast food for her children led her to open the first of several Café Patachou locations, a now wildly popular casual café group here, in 1989. In the decades since, she has single-handedly transformed the city’s dining scene with everything from laid back, culinary-focused breakfast cafes to brick-oven pizza, a hidden speakeasy spinning vinyl records and several Public Greens, a fast-casual salad spot that operates its own farms and donates profits to children’s charities. Hoover is a James Beard Award semi-finalist, Eater.com’s 2017 “Restaurant Empire Builder of the Year,” one of Fortune’s “Most Innovative Women in Food and Drink,” and even Vogue notes, “In Indianapolis, one woman is realizing the future of sustainable food.” The latest addition to her burgeoning dining empire is Crispy Bird, a fried chicken restaurant that opened in December.

The straightforward-looking spot in the Meridian Kessler neighborhood is just two blocks from Butler University and nearly as close to the Indiana Governor’s Mansion. It is near a main intersection that Hoover has effectively taken over, directly across the street from one of her gourmet pizzerias, Napolese, and her speakeasy Bar One Fourteen (nearly impossible to get into because it is so popular and tiny). Crispy Bird is pretty casual with minimal signage — just low-key lettering and the logo of two chicken legs. Upon entering, there is an impressive corner bar directly in front of you and to the right, a medium-size dining room. It is modern and comfortable, sleek with unworn blond wood walls, exposed overhead ductwork, minimalist black tables and chairs, framed pictures of various heritage breeds of chickens as the sole décor, and little else, save for the rock/adult alternative soundtrack playing just a little too loud.

The food: Hoover made her reputation as an early pioneer of farm-to-table and sustainable cuisine, and Crispy Bird continues this vision. Hoover is heavily influenced in all things culinary by her repeat visits to France, and in the new spot’s chef is her son, who attended culinary school in Paris. After tasting the famed Poulet Rouge chicken in France, Hoover extensively researched breeds and ended up working with Indiana’s Gunthorp Farms to develop a flock of what she calls American Freedom Ranger chickens, a heritage breed unlike anything seen in this country in several decades, with a made up name because of the rules governing regional European breed names. The chickens are humanely and naturally raised at Gunthorp with what Hoover describes as “old world farming and breeding methods.”

All the chicken served at Crispy Bird is American Freedom Ranger, and it is delicious. It is also bigger than your average fried chicken bird, so be prepared for large pieces. It is noticeably moist and juicy, especially the large breasts, which you would expect to dry out, but not here. If there was such a thing as an all-dark-meat chicken, this is as close as I have seen to that ideal. On top of the quality of the birds, the cooking is perfect, with a standout crispy breading that is so deliciously seasoned I keep picking up little pieces that fall on the plate and eating them on their own.

The two main options are a leg and thigh or a breast, both served with coleslaw and the delicious house-made pickles, and at lunch there is the option of adding a sourdough waffle. Besides the signature fried chicken, entrée options include a charcoal-grilled breast, a boneless fried chicken sandwich, and for vegetarians, “Nashville Hot” cauliflower. Every Tuesday there is a burger special that has nothing to do with the rest of the menu, but has quickly become popular, and it is easy to see why it draws people in. A custom grind of brisket, short rib and sirloin, is all from grass-fed, drug-free cattle raised at Indiana’s Fisher Farms. It is a big double-patty burger served on house-made brioche rolls with barbecue aioli, and it is wonderful. One of the secrets to the success here (and at all of Hoover’s eateries) is that virtually every element of every dish is made from scratch with the best ingredients. The brioche buns, pickle and two exceptional hot sauces are the most prominent examples: the red is mildly hot from Fresno chilies, the green quite spicy and made of jalapeños.

The drool-worthy fried chicken would be more than enough to anchor the eatery, but the eclectic list of sides and small plates takes things up a creative notch. Some of the most popular options include deliciously fresh homemade biscuits, which are soft inside with slightly crunchy crusts, served with addictively decadent whipped maple brown butter (which is also great directly on the fried chicken). Awesome mac and cheese is made pan style — cut into rectangles and finished by crisping the sides in a cast iron pan, resulting in an amazingly crispy exterior and a mouthwatering richness from three kinds of cheese, including a very sharp cheddar and creamy sheep’s milk. It oozes melted cheese goodness and is simply one of the best renditions of this beloved comfort food I have ever had — even before the optional shaved fresh black truffle (real, not the totally artificial “truffle” oil used by the vast majority of restaurants in this country). This, along with caviar, is an option that can be added to just about anything on the menu.

Beyond these staples, things get more experimental, like the grits topped with popped sorghum, a corn-like grain that results in sweet miniature popped-corn like crispies. Their southern take on Asian fried rice uses the domestic Carolina Gold variety and adds kohlrabi kimchi, pickled apricots, charred spring onion, wasabi leaf chips and is finally topped with a couple of poached free-range eggs – suffice to say you have never had this particular dish anywhere else before. Other salad oddities include one with spring peas, mint and nettle ricotta and another with grilled kale steams and avocado vinaigrette. One notable bar snack is the mini-pork tenderloin sandwiches, sort of a pork cutlet slider with the same great breading. The breaded fried pork tenderloin sandwich is a Midwest specialty, usually oversized, and one of Indianapolis’ signature foods, visited by Great American Bites before at Plump’s Last Shot.

At the end of the day, Crispy Bird wins over virtually all takers with amazing renditions of several of the nation’s favorite comfort foods, fried chicken, burgers and mac & cheese, alongside enough creatively gourmand and meat-free dishes to wow all tastes. The bar features a slate of craft beers, signature cocktails and plenty of wines by the bottle and glass.

Larry Olmsted has been writing about food and travel for more than 15 years. An avid eater and cook, he has attended cooking classes in Italy, judged a barbecue contest and once dined with Julia Child. Follow him on Twitter, @TravelFoodGuy, and if there’s a unique American eatery you think he should visit, send him an e-mail at travel@usatoday.com.